A problem for businesses when the server’s data is getting bigger and bigger is how to backup and restore. Whether a system’s data is protected by a separate storage system, NAS cabinets, or more advanced, a SAN, ensuring data backup is always necessary. Through this article, Cloudzone wants to bring to you the risks encountered by a server system and the need for backup data. . First, let’s find out what types of servers and storage devices are commonly used, and whether their current data backup methods are really safe.

Years ago, when the virtualization environment was not as developed and popular as it is today, businesses used physical servers to store data – for example web hosting, email servers, computers. The host contains accounting software, Smile software (hotel), … The operating model will be a physical server that installs the operating system (Windows Server or Linux), then installs the necessary applications (Web server). , database, mail, or specialized software of the enterprise) and put into operation. Data generated during operation will be stored on the physical server itself.

So it can be seen that the physical server has quite a lot of risks leading to data interruption/loss when faced with the problem of stability of all components inside the server, especially for with servers with a lifespan of 2-3 years or more, the probability of component failure is increasing.

It can be seen that the above backup plan when there is a problem, the restore will take a lot of time. Setting up a Production environment and then copying backed up data is not simple and fast, especially for large systems, when the environment needs many complex configurations. That’s not counting systems that have been running for many years, it’s still difficult to control, let alone reinstall the same environment.

As the development of virtualization technology has brought a great choice for businesses, the use of virtualization helps to save resources, effectively exploit server resources, and is convenient in work. backup, restore. However, it is not perfect and still has significant risks.

The term virtual server is also known as VPS – to refer to virtual machines that act like a regular server with 3 basic parameters CPU, RAM, DISK, located on top of the physical server. Some risks come from VPS virtual servers:

Use a SAN or NAS

A popular and expensive data storage option today is using SAN and NAS.

While NAS is a redundant storage solution, mainly storing data that does not need to be read and written large, SAN is the most optimal solution today for IT systems. SAN disk cabinet is a combination of many internal hard disks operating under RAID mechanism plus many advantages of SSD caching, RAM caching and high-speed FC interface to communicate with servers through HBA cards. . Therefore, systems using SAN are often invested and set up quite synchronously from the network environment, servers, storage devices (SANs), hard disks, network devices and SAN switches. Therefore, the cost of SAN systems is very expensive, beyond the reach of small and medium enterprises.

Despite the high cost, its safety is not absolute and also exposes many vulnerabilities. Some disadvantages of SAN can be listed as follows:

So in this case, in order to use SAN safely, it is necessary to (1) Invest the cost to buy very good hard disks to reduce the risk of the system, and (2) must use the support services of the supplier to support the replacement of hardware when there is a problem with a small cost.

So what is a reasonable VPS backup plan?

To be called reasonable depends on many factors, mainly based on the importance classification of the system, but there are backup plans accordingly. Cloudzone offers the most popular and effective backup plan during our operation, which is: Cloud VPS combined with Backup as a Service.

It can be said that this combination is a safe solution for customers’ data when in any situation, customers will also have backup copies to avoid the risk of loss. data due to hacker attacks, unintended subjective incidents.

Backup as a service at Cloudzone

This is an additional service for customers using Cloud VPS at Cloudzone. Cloudzone’s backup system uses VEEAM’s solution and is set up with a backup and backup mechanism for VPS on a daily basis.

Accordingly, for customers using backup service, your Cloud VPS will be put into the backup system and automatically backed up at night – after 10pm. All data after backup will be dumped into 1 file in VEEAM format and stored on Cloudzone’s backup system. In case you need to restore VPS to the latest version (1 day before), Cloudzone will support you to restore. In addition, you can also download the backup file for optional storage.

Refer to the price list of Backup As A Service

Refer to Cloudzone’s price list and Backup As a service at here: 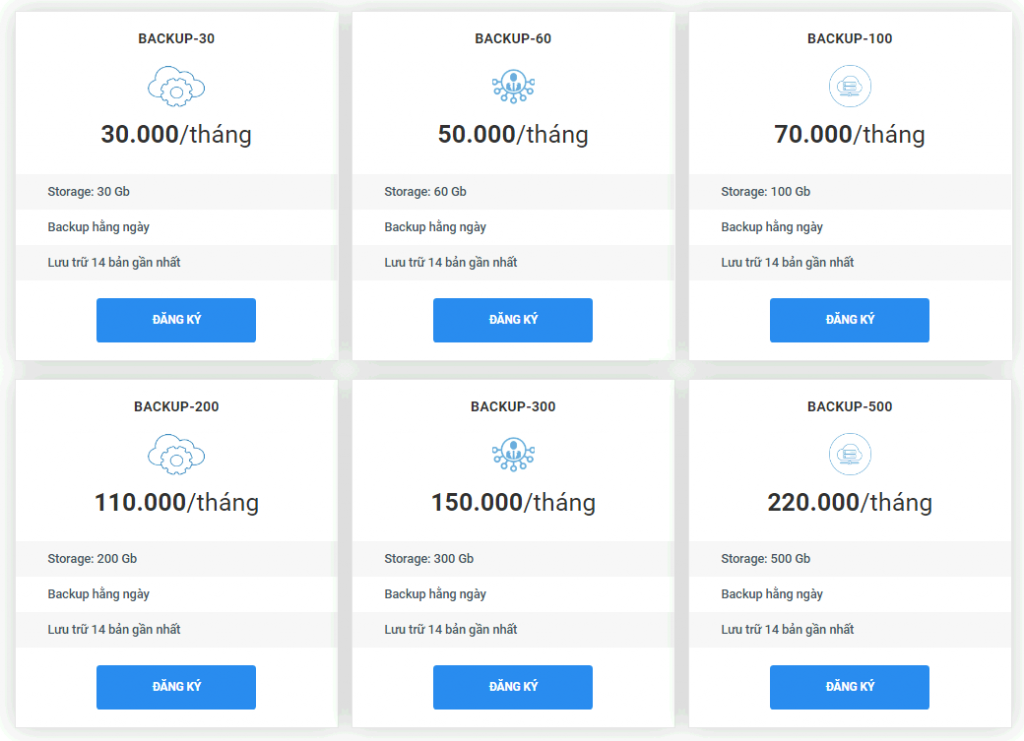 Hopefully the above article will help you get an overview of backup and backup and choose the most suitable option.

Finally, CLOUDZONE always puts customer satisfaction first, so we guarantee 24/7/365 technical support to our customers. throughout the service life. With a professional and experienced technical team, we are committed to answering and troubleshooting problems that will meet the most stringent requirements of our customers.